The Queenie Award is presented to a staff member who excels in the field of programming at camp.

Introduced in 2007 the Queenie award is named in honour of Mike Hinchley. Mike started his camp career in 1990. He quickly made a name for himself as a dedicated and fun-loving member of the staff team. Over the years Mike created and developed new and exciting programs. Known for jumping into any program and getting lost in his role or character. Mike’s energy and enthusiasm has had a lasting impact on hundreds of Arrowhead Campers and staff. Mike defines everything the camp is about. He is loyal, dedicated, caring, enthusiastic and dependable. The Queenie Award is presented to a staff member who excels in the field of programming at camp and displays similar characteristics and qualities as our Queen.

Sam is the 2017 winner of the Queenie Award. Sam has worked at camp for 3 years and she’s become a major part of all camp programs and events. She has excelled in the areas of planning programs and portraying a variety of characters. When planning programs she is original, creative and can be counted on to put forth an outstanding effort. She also takes the time to effectively communicate to campers and the staff. These strong programing skills have allowed her to contribute new ideas and games to her activity, during meals and other areas of camp life. Sam consistently takes the time to put together great costumes and her strong acting skills allow her to easily portray a variety of camp characters. These characters are often one of the highlights of the event. She communicates concerns to the Camp Directors and also ensures that campers are taking part in a safe environment. She also helped to further develop the camp’s nature and craft programs by promoting fun activities for campers and staff. Sam’s most notable strengths are her organization skills, sense of humour and outstanding ability to work in a team. Whether it is behind the scenes or as the star of the show Sam can do it all! We are proud to call her our 2017 Queenie.

One of our 2014 Queenie Award winners is Kyra Chisholm. Kyra has spent 9 years at camp and she has worked as a Ski Staff, Waterski Director and in her current role as the Program Director. This summer Kyra has worked hard to ensure that all camp programs are run smoothly. She created, planned and performed a number of quality theatrical performances. The highlights of these were Finding Nemo and the Wizard Of Oz. She helped to coordinate and supervise a large number of staff and campers in these productions. She also challenged the staff to strive for creativity and originality when planning programs. Kyra can also always be counted on to put forth a quality effort when planning programs. She also excels when in front of the group being able to take on a variety of roles and characters. She has helped to create many long lasting memories for campers and staff.

Jordana Bengall is a 2014 recipient of the Queenie Award. She has spent 9 years at camp and she has worked as a Nature/Crafts Staff and as a Nature/Crafts Director. Jordana has exceled in the programming aspect of camp. She has the ability to take on a variety of roles and is a leader in many programs. She puts in the necessary effort when planning camp programs and can be counted on to be innovate, creative and original. She has also brought many new craft ideas to camp helping to improve the programs offered. Jordana also has a deep respect for nature and she helped to make camp more environmentally friendly. She has also been a big help in planning and working on the theatrical performances at camp. Whether it’s behind the scenes or the star of the show Jordana can do it all. She has helped to create many long last memories for many campers.

The 2013 Queenie Award winner is Priya Khanmaini. Priya has worked at camp as a Sailing Instructor, Sailing Director and in her current position as the Program Director. Priya has had a direct influence on every camp program and event this summer. She has worked behind the scenes helping to co-ordinate all of the camp programs. She has ensured that the campers are being entertained in a fun and safe manner. This summer Priya helped to organize the Arrowhead Games, The Campbell Cup and a number of other amazing camp events. She uses her creativity to change old programs and to present a number of new ones to the campers. Priya can also play a variety of roles and take on different characters. She is well organized, adaptable, cooperative and an effective communicator. These skills have allowed her to excel in her position.

Carolyn Munro is the 2012 winner of the Queenie Award. Carolyn has been coming to Arrowhead for 6 years and over her time at camp she has grown into an excellent staff member. It’s hard not to be in a good mood when Carolyn is around. She can bring up a group’s morale in seconds and her positivity is contagious. Carolyn loves to entertain and she is in her element when in front of a group of campers or staff. She never hesitates to play a character or help out in a program. She also puts in the proper time and care when planning camp programs. Her antics and costumes add to many events. Her enthusiasm and passion for camp is evident in everything she does. Carolyn has the ability to make things fun and this rubs off on the entire camp.

The 2011 recipient of the Queenie Award is Alex McNulty. Alex has spent eleven summers at Arrowhead and throughout his time at camp he has always been a very enthusiastic and energetic individual. His passion for camp is evident in everything he does and he has a unique talent of making things fun and entertaining. Alex’s main strengths are his creativity and his ability to make elaborate costumes and to portray several different roles and characters. This has added excitement to many different programs and has created lasting memories for the campers. His unique sense of humour and fun personality makes him a huge asset to the Arrowhead family.

Danielle Rusheleau is the 2010 Queenie Award winner. Danielle first arrived at Arrowhead as a young camper and she has grown into a strong leader with a dynamic personality. Danielle has the ability to have fun in any situation. She loves to entertain campers and staff and she thrives when performing in front of the camp. Danielle is very creative and has helped to plan and implement many new programs and games for the campers. Her energy and enthusiasm is contagious and she has had a long lasting effect on many campers.

Michael Meehan is the 2009 winner of the Queenie Award. Michael has been at camp for the past six summers and has developed into an excellent staff member. He consistently brings enthusiasm and positive energy to everything he gets involved in. He spends the majority of his day entertaining and playing with campers. He does an excellent job planning programs and he loves dressing up in costumes and becoming different characters. Michael builds a solid rapport with all the campers and staff and he ensures that they are having fun at all times.

Tim Rushelau is the 2008 recipient of the Queenie Award. Tim has grown up at camp and he has developed a great rapport with all campers and staff. He has the ability to add energy and enthusiasm to all programs and he ensures that programs are well organized. He is very creative and has helped to develop many new programs at Arrowhead. Tim thrives when he is in front of the camp and leads the camp in many cheers and sing songs. Tim takes pride in making sure that programs run smoothly and he is the first to put on a costume and jump into a new role. His voice reflects his outgoing personality and his positive aura is great for the camp.

As the inaugural recipient of this award Dave has consistently displayed and desire to excel in the area of camp programs. Displaying confidence in front of ant group size, Dave has the ability to entertain and capture the imagination of campers. Driving the enthusiasm of campers, staff and LIT’s Dave has the innate ability to make any program exciting and dynamic. 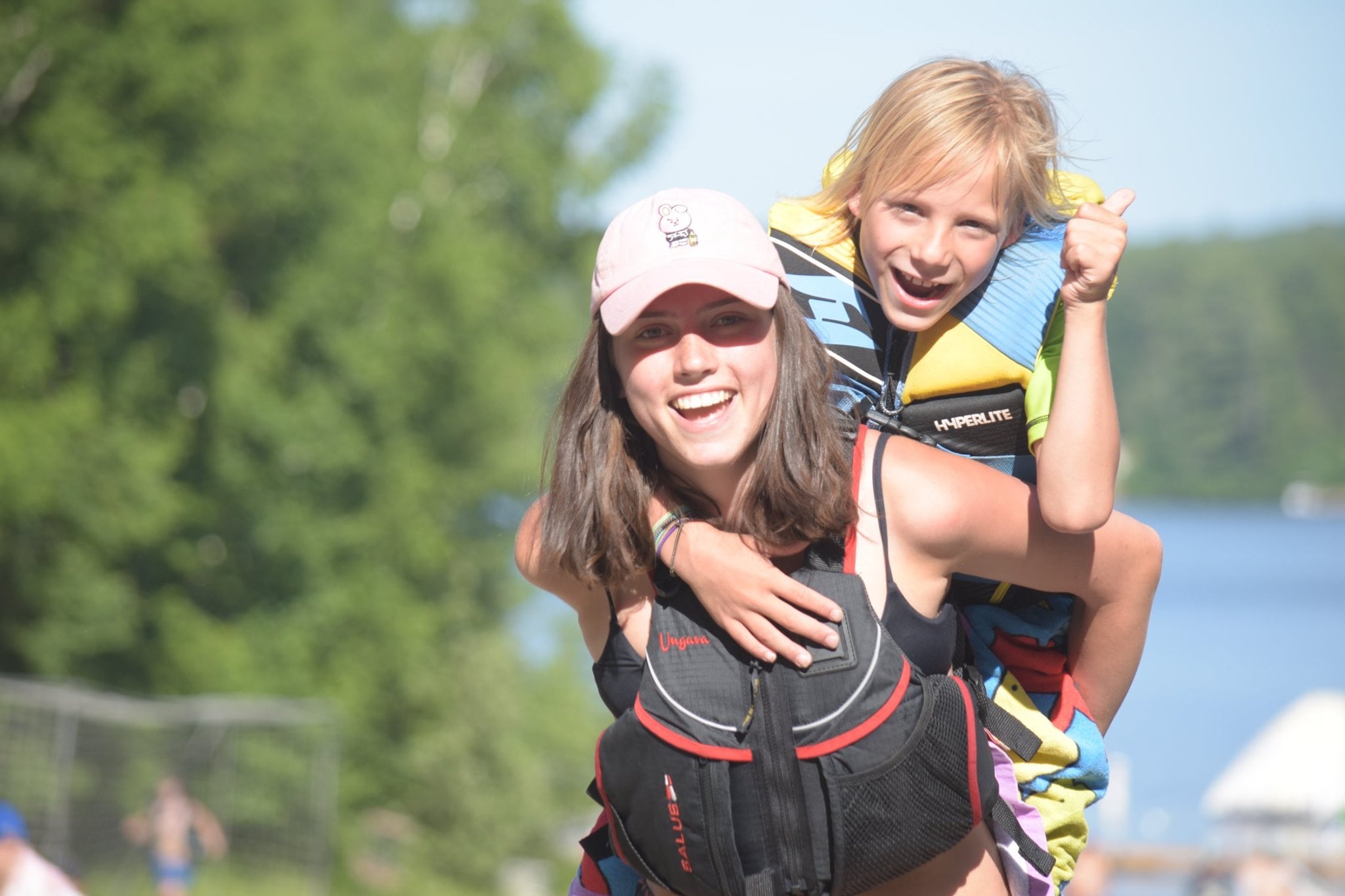